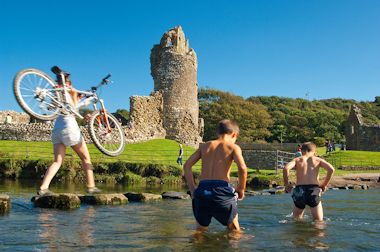 Ogmore Castle dates from the early 12th century and was constructed by William de Londres following the Norman invasion. The castle once had a three story keep and stood forty foot high and contained a great hall decorated with elaborate windows and the usual ornate fireplace in an effort to keep the castle warm.

In the 13th century a second story was added and the castle had garderobes (medieval toilets) on two levels that were used by the lord and his family and today a well preserved latrine tower can be seen which adjoined the lords apartments.

By the 14th century a courthouse in the castle was in use with the building being rebuilt in the 15th C. As happened with a number of castle and buildings the castle at the time it did sustain heavy damage during Owain Glyndwr’s reign, but repairs were made and with the court house being used until the 1630’s.

Over the years the castle had a number of owners, ultimately becoming part of the Duchy of Lancaster in whose ownership it remains today.